Ames Nowell is a 600 acre year-round day use area with most of the recreational activity centered around Cleveland Pond. The pond is very popular with boaters and fisherman. Development includes a picnic area, a large parking area that is usually open on weekends in the summer, a ballfield and about 10 miles of trails along the pond's edge and the surrounding woods. Note: After a budget related hiatus last year the park will once again be staffed starting in 2013.

NEW: There is an interactive map of Ames' trails currently hosted by the Friends of Wompatuck. Open this map in your phone and click on "show my position" from the dropdown menu and you'll see where you are in the park. There are also two pre-planned routes that you can enjoy.

Some of the park's trails were created many years ago by off road motorcycles and ATVs. These saw little in the way of upkeep over the years, but that has changed in the last few years as SEMASS NEMBA and local riders, working with the DCR began to do trail maintenance. The result has been an extensive network of what I like to call "flowy technical" trails. In the Summer of 2005 AmeriCorps volunteers did extensive trail work in the park. And they returned in the summers of 2006 and 2007. Many gates were erected on old woods roads leading into the park in an effort to prevent illegal off road vehicle use.

The trail on the eastern shoreline of Cleveland Pond is probably one of the more difficult ones in the park. Much more enjoyable is the path paralleling that one on high ground. It runs from the ballfield to the northern end of the pond.

On the other side of Cleveland Pond there is a fairly mellow trail that leads to a boardwalk and then to another trail that ends on a peninsula that juts out into the center of the pond.

To get into the flowy technical trails right away, cross the dam and turn left behind the big rock. You'll find a lot of trails to explore. Or you could follow the main trail that starts at the western end of the dam out to the powerline, then either cross the powerline or climb the hill on your right. That will lead you to the trails that lead into the backside of the park. These include the ATV/motorcycle trails that I mentioned above. (The park has always been closed to motorized vehicles.) Some of these trails will lead you most of the way around the pond. AmeriCorps main project in 2006 was to build a 150-foot long bridge over a long badly bogged out section of trail on the far western side of Cleveland Pond. (Pictured to the right.) The addition of this bridge has restored a long abused trail. It has made a long mud bog manageable and, over time, will allow the surrounding forest to heal itself.

For a more technical ride, after you cross the dam bear left on the trail behind the big rock. This will lead you to a network of quite enjoyable, somewhat challenging trails that never stray more than a half mile or so from the lake.

Exploring the trails in the western side of the park you'll find many large boulders to ride over and many long flowy technical singletracks.  In some cases, it might seem like the trail that you're on was designed to find every big rock in the woods and then to go right over it. And in fact, that's the case!

In all you'll find well over two hours of varied riding at Ames Nowell State Park. Some of it is very well suited for kids and beginners. While other trails will appeal to the most hardcore of riders. It's up to you to explore the place and decide which are which.

Ames Nowell has a Facebook Page with a lot of current information.

Want more of the same kind of riding.  Check out the nearby Holbrook and Braintree Town Forests. 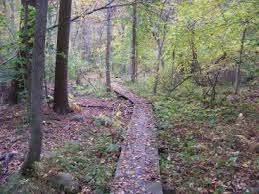 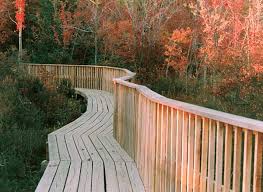 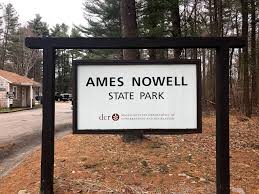